I am still gathering information on the Blessed Maurus (vere William) Scott and his biographer, Johannes Rubeus, also known as John Wilfrid Selby. Died at Tyburn, England, in 1612; beatified in 1929. Scott was born in Essex and studied law at Trinity Hall, Cambridge. He was converted to the truths of Catholicism by reading Catholic literature, and received into the Catholic Church by Saint John Roberts (also a convert to Catholicism), who sent him to the Benedictine Abbey of Sahagun, Spain. He was received into the Benedictine order in 1604,  and returned to England as a missionary in 1610, having also spent time at St. Gregory's in Douai. John Roberts was hanged, drawn and quartered at Tyburn that same year, an event which Scott apparently witnessed. Two years later, on May 30th, 1612, he too was martyred for his priesthood at Tyburn, along with Richard Smith (vere Newport),  ordinated in Rome in 1597. He was beatified in 1629. Scott is not listed in the DNB, and the above information was taken mainly from this website.
Scott is commemorated in the coat of arms of Ealing Abbey, which  includes "a cinquefoil from the arms of Abbot de Cavarel, whose hospitality enabled the community of St Gregory's to be built up at Douai in France. The ermine spots on the cinquefoil refer to the five members of St Gregory's who were martyred at Tyburn (Blessed George Gervase, St John Roberts, Blessed Maurus Scott, Blessed Philip Powell, Blessed Thomas Pickering)." (Source: Ealing Abbey web site.)
About Iohannes Rubeus I know only that he became Abbot of the Benedictine community of Lamspring, in Westphalia, in succession to Dom Clement Reyner, to whom the following book is dedicated. 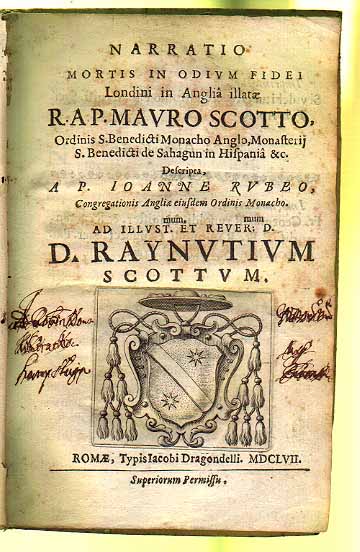